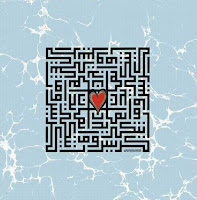 Shortly after Chris passed in Nov.1988 I decided to share Christopher's work in a Tribute book and celebrate his life cut so short.
First I arranged a memorial exhibition at Dawson's Bookshop in February 1989. In 1992 I showed his research of his slide lecture on the Deccani research and work at the International Gathering in San Francisco. In 1998 I was asked to bring his work to Ebristan in Istanbul, Turkey. Chris had visited there the year before in 1987 and I remember well how he described his time there and the people he met. How exciting for him, his only trip during all his years of marbling searching for answers, trying to trace the history. I will write about that experience of bringing his work there in a later entry. In appreciation of having brought Christopher's work to Istanbul I was given this very special gift above left. I was already on the way to the airport when Fueson Barutcugil's cell phone kept ringing. Someone needed to get ahold of us. It was this gift by Professor Dr.Huesrev Subasi of Marmara Univesity,Ilahiyat who hoped to hand it to me before I left. When I see this beautiful gift and the next one shown below I know it was the right thing to keeping Chris's memory alive. The above piece reads in Kufic script: Christopher and Ingrid Weimann on all four corners. To have received it in person the last minute before we boarded the ferry was so touching and so very appreciated as are all the other gifts I received over the years. 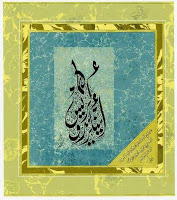 Here is the other treasure by Mohamed Zakariya on the left who gave it to me in Feb.2000. I reads from the lower left: "Ingrid & Chris Forever" in Celi Divani Script. The triangle is a piece I gave Mohamed that Chris had gotten in Istanbul on his only visit there. The inner blue marbling of Chris's from their only collaboration. Mohamed preserved Chris's ebru and used the outer Ebru using his papers. They sadly never met in person. They collaborated on one piece in 1988 shown below. Chris was told by Sandra Kirshenbaum of Fine Print that he should contact Mohamed that they were kindred spirits. This happened in the spring of 1988 and Chris sent some specially prepared papers for the project after they corresponded.

Christopher got to see the finished piece the month he passed and for him it was hope for future projects. These are all the treasures you share with dear friends you meet through art and their passion.
May this sharing of the human spirit keep life alive.
Posted by storieswithbrushesandwords at 4:39 PM