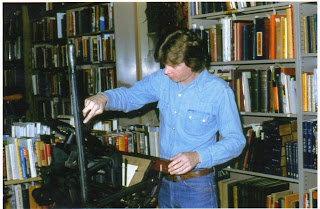 Marbling in miniature. I had promised an entry long ago, giving it a try now.
Doing the job himself on his second book was a great joy, every single step of the process.
Here he is printing the text on a Pilot Press at Dawson's Book Shop. In 1981 he received the Award of Merit of the Western Books Exhibition, being the first Miniature book on this subject to receive this award. 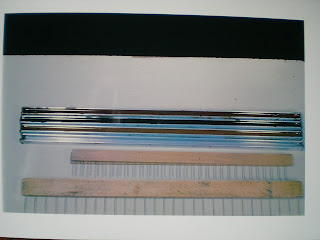 The color troughs for the miniature papers were metal pieces used for sliding glass windows
with wax at the ends to retain the colors. 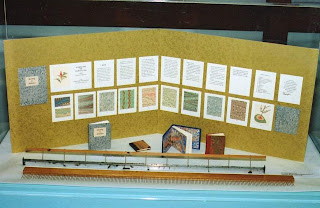 I eventually had the loose pages mounted on a board to show at lectures.  In front are a few projects he was asked to do for others. The combs shown are for larger papers.

Here he matched the colors to the stamp "The Legend of Sleepy Hollow" by the Rebecca Press to commemorate the 200th anniversary of Washington Irving's birth.
Having given a slide show on the making of his book on Marbling in Miniature he was asked to do other end papers for projects. 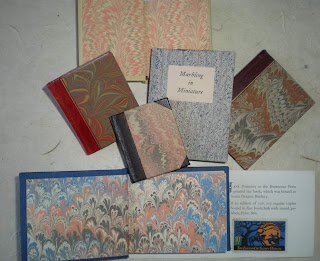 Perhaps I'll add a few more pictures in time but just wanted to share this because I had promised long ago. I may have mentioned this somewhere already that Milena Hughes had made the collage of photos for me that I had sent her and is in the heading of the blog.
Posted by storieswithbrushesandwords at 7:05 PM