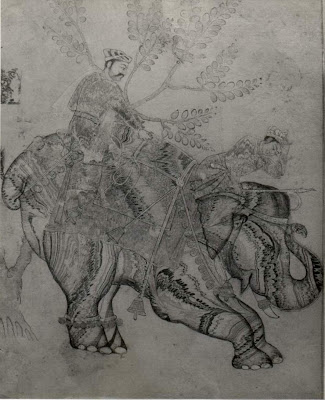 It has come to my attention that a miniature painting Christopher recreated to learn how it was made is in the collection at the Brooklyn Museum: http://www.brooklynmuseum.org/opencollection/objects/127707/Stalling_Elephant/set/?referring-q=elephant=
It belonged to Dr. Bertram Schaffner who had it hanging in is office for many years before it was donated to the Brooklyn Museum. He allowed Chris to publish his findings in his Fine Print article of Oct.1983, Volume Nine, Number Four. It was one of the first multiple stenciled pieces Chris was intrigued with and wanted to study and learn how to make. Some years later he met Dr.Schaffner in person in NY city and saw the original. Dr.Schaffner felt he should put the painting in a safe after discussing all that he learned about the miniatures so he said to Chris "Thanks a lot Christoper, now I cannot enjoy it on my wall anymore" with a smile I'm sure. 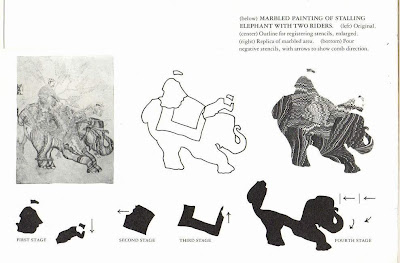 "Stalling Elephant with Two Riders is an excellent example of a painting produced by the stencil method, in this case by means of four different stencils. While all four marblings are in tarakli-ebru pattern and were made with the same comb, variety was achieved by combing the pattern in varying directions and by using different colors for each marbling. The marbler used a single comb with a pin spacing of approximately one millimeter. The two riders were produced with the first stencil, the top blanket was shaped by the second stencil, and the under blanket by the third; the fourth stencil created the elephant's body. After each of these stencil applications, the marbled paper was thoroughly rinsed, dried, pressed, and recoated with a solution of alum. The fourth pattern is particular interesting because several "skips," long solid lines, appear in the tarakli-ebru pattern. A skip results when a marbler lifts the comb out of the size for a short interval and puts it in again as he pulls the comb across the colors. (Skips are also prominent in the marbling of the four paintings of emaciated horses.) Obviously the artist gave a great deal of thought to how he could achieve life and movement in his painting through marbling. After the marbling was completed, the remaining details were drawn in by hand. The stencils need not have been applied in the order given here, but I found that using them in any other sequence would have meant covering a larger area at each marbling to mask what had been marbled previously. In those marbling processes where a stencil must be glued onto previously marbled areas of the paper, great care must be exercised while soaking and peeling away the stencil; removing the stencil too quickly could damage the marbling." (Christopher in Fine Print, in above mentioned issue. 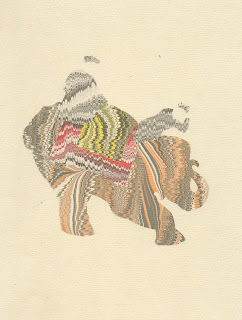 Christopher's passion for learning, the challenges of what had been done hundreds of years before him, the joy of discovering and sharing and now being quoted in a museum surely would make him smile and be proud. I want to thank Jake Benson for inspiring this entry by letting me know of the piece's web access.

Posted by storieswithbrushesandwords at 6:40 AM