These entries are to be so different from the book or articles I have written because I want to do it out of simply sharing little anecdotes, hopefully of interest. Christopher had hoped to eventually make papers for sale as a business but working out of a bedroom made it impossible so one day he decided to continue supporting the materials and time with restoration work and focus instead on research. Along the way, finally relaxing from just accomplishing large patterns he made flowers. The one here on the left I call "My flower" it was one I loved and wanted to keep. When he had his one and only exhibition at Dawson's Book Shop in 1979 he asked me to show it. He actually hadn't realized he was having an exhibition until he saw the invitation for his first slide lecture at the Book shop and it read "Exhibition!"

What news it was to him so he got to work quickly and created (under pressure) some beautiful work. As he and Muir Dawson were hanging "my" flower a Book dealer came in the door, pointed at my flower and said "I want that!"and Chris said "Okay." His first sale after working 8 years on perfecting his marbling. As Muir Dawson wrote in the Tribute book "Remembering Chris" he stated the true spirit of Chris " He had only one showing where his marbling was for sale and in total probably gave away more material than he sold." So very true, he hated giving a price(as I do) and it wasn't because we didn't need money, he was just so happy to see enthusiasm and joy and always said to me that he was still learning! I can truly say we gave it our spirit without much money; our first vacation after 10 years of marriage to New Mexico, what inspiration of colors!

I do not have a single one of these early flowers, he gave them all away except the one below that he made much later. 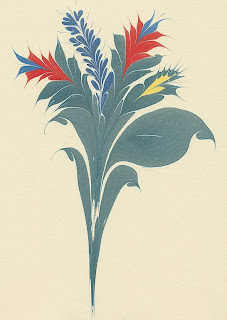 I can just imagine him smiling as I write this or even disapprove, (too shy) that rascal! A beautiful giving and inspired human being and I do hope it's worth writing about. I truly thought moments ago that I give up adding to this blog but then I can't help myself sharing memories of a Marblers' quest for beauty.

In the early 80's after his lecture at Stanford University Chris was asked by Sandra Kirshenbaum of Fine Print to do a cover for her publication with
one of his flowers, but only in black & white (do to costs). He told her he couldn't do that but limited his design to two colors made to fit the cover and flowers especially created for it.
The printers told me later on when I visited them in SF that they had a heck of a time showing the fine lines coming out of the flowers.
Needless to say, every time the magazine was laid out it was taken by people. This was the first color cover of Fine Print and after that they always used color. The next cover was the piece of Chris's research of an Indian Miniature and another one for Fine Prints Tenth Anniversary.
Posted by storieswithbrushesandwords at 4:58 PM